© Copyright © All rights reserved | This template is made with by Colorlib

Hi I'm Sandor Kruk, Postdoctoral Research Scientist at the Max Planck Institute for Extraterrestrial Physics in Garching, Munich. Previously I was a Research Fellow at the European Space Agency in the Netherlands. I have wide research interests regarding the analysis of Big Data astronomical surveys, including the detection and classification of galaxies, strong gravitational lenses and asteroids with citizen science and artificial intelligence. My scientific interests lie in the formation and evolution of galaxies across the cosmic history, galaxy morphology, galaxy dynamics and star formation.

I was born and grew up in Romania. I discovered astronomy in high school and have been in love with it ever since. Besides research, I am deeply passionate about education and increasing the access of young people to science education. I initiated three large projects: Romanian Science Festival, the British Astronomy and Astrophysics Olympiad, and the Oxford for Romania Summer school, reaching thousands of students every year. You can find out more about them below.

I am experienced in designing end-to-end AI solutions to space applications, in particular for prediction, object detection, image processing and analysis, with tools such as Python, scikit-learn, TensorFlow, Pytorch, and cloud-based software such as AutoML, Google Cloud.

Project Scientist of Galaxy Zoo. Leading the science team behind the most succesful online citizen science project. Coordinating the science based on the morphological classification of large samples of galaxies.

Coordinating projects studying the impact of artificial satellites on space-based observatories such as the Hubble Space Telescope and the ESA CHEOPS mission. Member of working groups such as SATCON2.

Bachelor and Master in Astrophysics at University College London, UK 2010-2014

I have been fortunate to be awarded prizes for my academic achievements and social impact.

Special Award for Excellency during Doctoral Studies awarded by the League of Romanian Students Abroad, supported by the Romanian Presidential Cabinet and Romanian Academy 2017

Prizes for the Best Performance every year, from 1st to 4th year, during the MSci Astrophysics degree at UCL 2010-2014

Large and publicly available astronomical archives open up new possibilities to search and study Solar System objects. However, advanced techniques are required to deal with the large amounts of data. These unbiased surveys can be used to constrain the size distribution of minor bodies, which represents a piece of the puzzle for the formation models of the Solar System. We aim to identify asteroids in archival images from the ESA Hubble Space Telescope (HST) Science data archive using data mining. We developed a citizen science project on the Zooniverse platform, Hubble Asteroid Hunter (www.asteroidhunter.org) asking members of the public to identify asteroid trails in archival HST images. We used the labels provided by the volunteers to train an automated deep learning model built with Google Cloud AutoML Vision to explore the entire HST archive to detect asteroids crossing the field-of-view. We report the detection of 1701 new asteroid trails identified in archival HST data via our citizen science project and the subsequent machine learning exploration of the ESA HST science data archive. We detect asteroids to a magnitude of 24.5, which are statistically fainter than the populations of asteroids identified from ground-based surveys. The majority of asteroids are distributed near the ecliptic plane, as expected, where we find an approximate density of 80 asteroids per square degree. We match 670 trails (39% of the trails found) with 454 known Solar System objects in the Minor Planet Center database, however, no matches are found for 1031 (61%) trails. The unidentified asteroids are faint, being on average 1.6 magnitudes fainter than the asteroids we succeeded to identify. They probably correspond to previously unknown objects. This work demonstrates that citizen science and machine learning are useful techniques for the systematic search of SSOs in existing astronomy science archives.

Vertically thickened bars, observed in the form of boxy/peanut (B/P) bulges, are found in the majority of massive barred disc galaxies in the local Universe, including our own. B/P bulges indicate that their host bars have suffered violent bending instabilities driven by anisotropic velocity distributions. We investigate for the first time how the frequency of B/P bulges in barred galaxies evolves from z = 1 to z ≈ 0, using a large sample of non-edge-on galaxies with masses logM⋆ > 10 logM☉, selected from the HST COSMOS survey. We find the observed fraction increases from 0^+3.6_0.0 per cent at z = 1 to 37.8^+5.4_-5.1 per cent at z = 0.2. We account for problems identifying B/P bulges in galaxies with low inclinations and unfavourable bar orientations, and due to redshift-dependent observational biases with the help of a sample from the Sloan Digital Sky Survey, matched in resolution, rest-frame band, signal-to-noise ratio and stellar mass and analysed in the same fashion. From this, we estimate that the true fraction of barred galaxies with B/P bulges increases from ∼10 per cent at z ≈ 1 to ∼ 70 per cent at z = 0. In agreement with previous results for nearby galaxies, we find a strong dependence of the presence of a B/P bulge on galaxy stellar mass. This trend is observed in both local and high-redshift galaxies, indicating that it is an important indicator of vertical instabilities across a large fraction of the age of the Universe. We propose that galaxy formation processes regulate the thickness of galaxy discs, which in turn affect which galaxies experience violent bending instabilities of the bar.

We present the results of two-component (disc+bar) and three-component (disc+bar+bulge) multiwavelength 2D photometric decompositions of barred galaxies in five Sloan Digital Sky Survey (SDSS) bands (ugriz). This sample of ∼3500 nearby (z < 0.06) galaxies with strong bars selected from the Galaxy Zoo citizen science project is the largest sample of barred galaxies to be studied using photometric decompositions that include a bar component. With detailed structural analysis, we obtain physical quantities such as the bar- and bulge-to-total luminosity ratios, effective radii, Sérsic indices and colours of the individual components. We observe a clear difference in the colours of the components, the discs being bluer than the bars and bulges. An overwhelming fraction of bulge components have Sérsic indices consistent with being pseudo-bulges. By comparing the barred galaxies with a mass-matched and volume-limited sample of unbarred galaxies, we examine the connection between the presence of a large-scale galactic bar and the properties of discs and bulges. We find that the discs of unbarred galaxies are significantly bluer compared to the discs of barred galaxies, while there is no significant difference in the colours of the bulges. We find possible evidence of secular evolution via bars that leads to the build-up of pseudo-bulges and to the quenching of star formation in the discs. We identify a subsample of unbarred galaxies with an inner lens/oval and find that their properties are similar to barred galaxies, consistent with an evolutionary scenario in which bars dissolve into lenses. This scenario deserves further investigation through both theoretical and observational work.

We use multiwavelength Sloan Digital Sky Survey (SDSS) images and Galaxy Zoo morphologies to identify a sample of ∼270 late-type galaxies with an off-centre bar. We measure offsets in the range 0.2-2.5 kpc between the photometric centres of the stellar disc and stellar bar. The measured offsets correlate with global asymmetries of the galaxies, with those with largest offsets showing higher lopsidedness. These findings are in good agreement with predictions from simulations of dwarf-dwarf tidal interactions producing off-centre bars. We find that the majority of galaxies with off-centre bars are of Magellanic type, with a median mass of 10^9.6 M☉, and 91 per cent of them having M⋆ < 3 × 10^10 M☉, the characteristic mass at which galaxies start having higher central concentrations attributed to the presence of bulges. We conduct a search for companions to test the hypothesis of tidal interactions, but find that a similar fraction of galaxies with offset bars have companions within 100 kpc as galaxies with centred bars. Although this may be due to the incompleteness of the SDSS spectroscopic survey at the faint end, alternative scenarios that give rise to offset bars such as interactions with dark companions or the effect of lopsided halo potentials should be considered. Future observations are needed to confirm possible low-mass companion candidates and to determine the shape of the dark matter halo, in order to find the explanation for the off-centre bars in these galaxies.

Link to paper
Where my work appeared

The combined power of citizen science and machine learning have led to the discovery of more than 1,000 new asteroids in archival images taken by the Hubble Space Telescope

Science for everyone: from festivals to citizen science

Search for Hidden Asteroids with the Hubble Asteroid Hunter

Coming from a country with a small representation in the international astronomy and science research community, I have a strong passion for helping others to discover their passion for science and enable them to succeed in their careers. Over the last five years, I have set up three initiatives to support young people in their scientific journey. Through these initiatives, thousands of students engage with science every year and have access to world-class researchers from all over the world as mentors. You can read about these projects below. 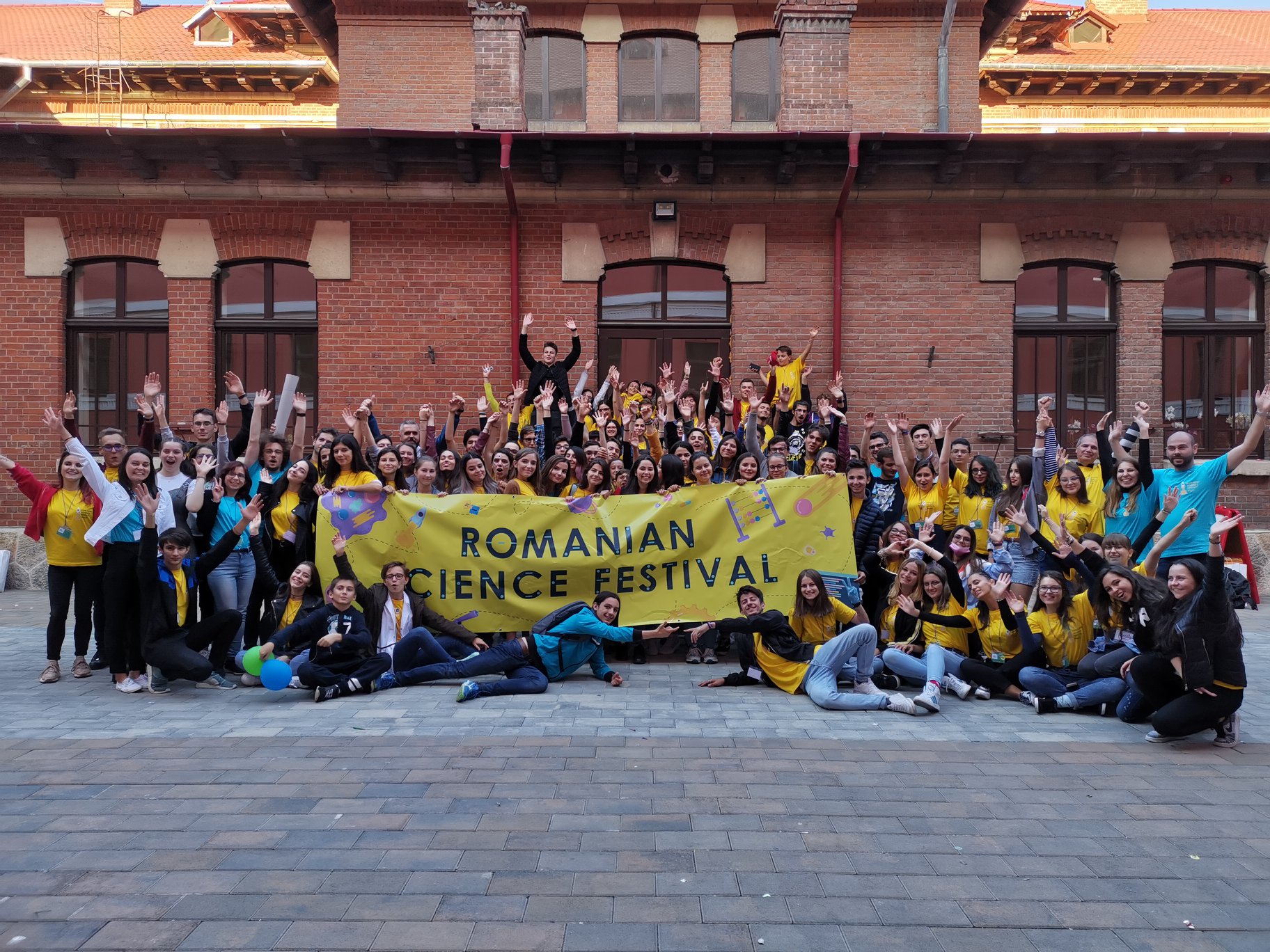 Initiated and coordinated the first national science festival in Romania. Organised in 3 cities in 2019, with over 700 volunteers, 70 scientist "mentors" and 20,000 participants. Strong online presence since 2020, with 50 science webinars and scientists joining 150 online classes. 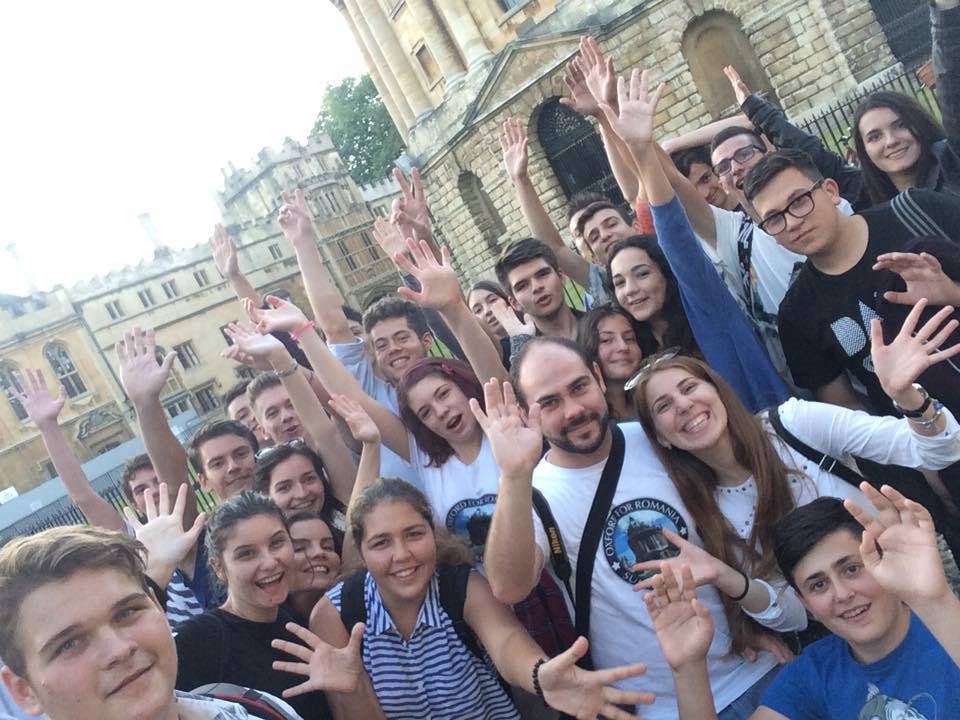 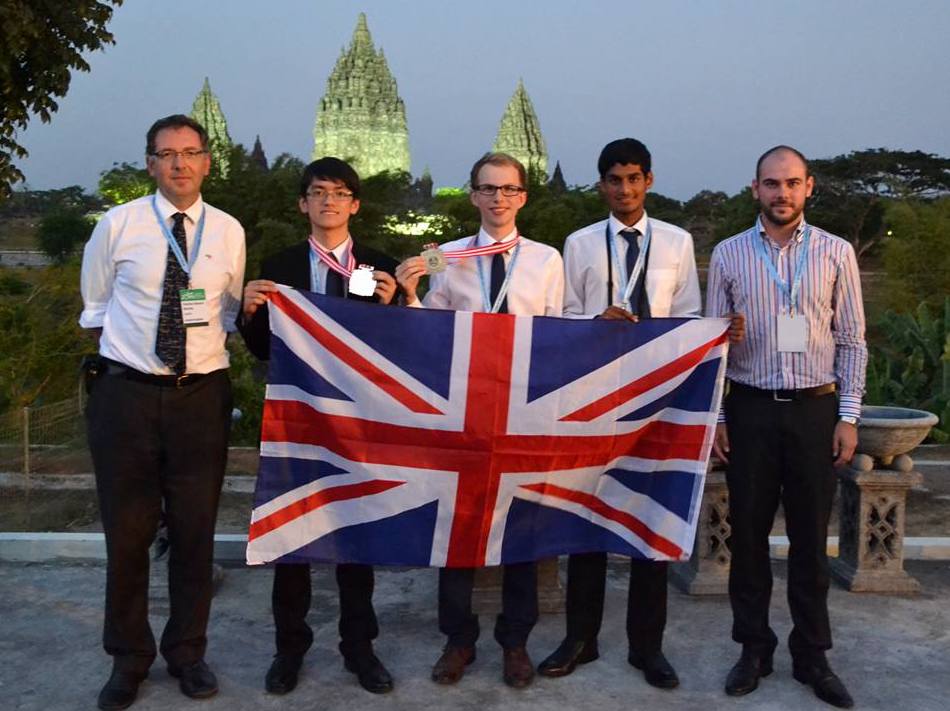 I enjoy communicating science at all levels and have given many public talks to a diverse range of audiences, both in person and online. If you would like me to give a talk please get in touch using the contact below. I organise workshops popularising astronomy and space at science festivals and open days. I coordinate a program connecting researchers from abroad with classrooms in Romania, giving young people the opportunity to meet real scientists. 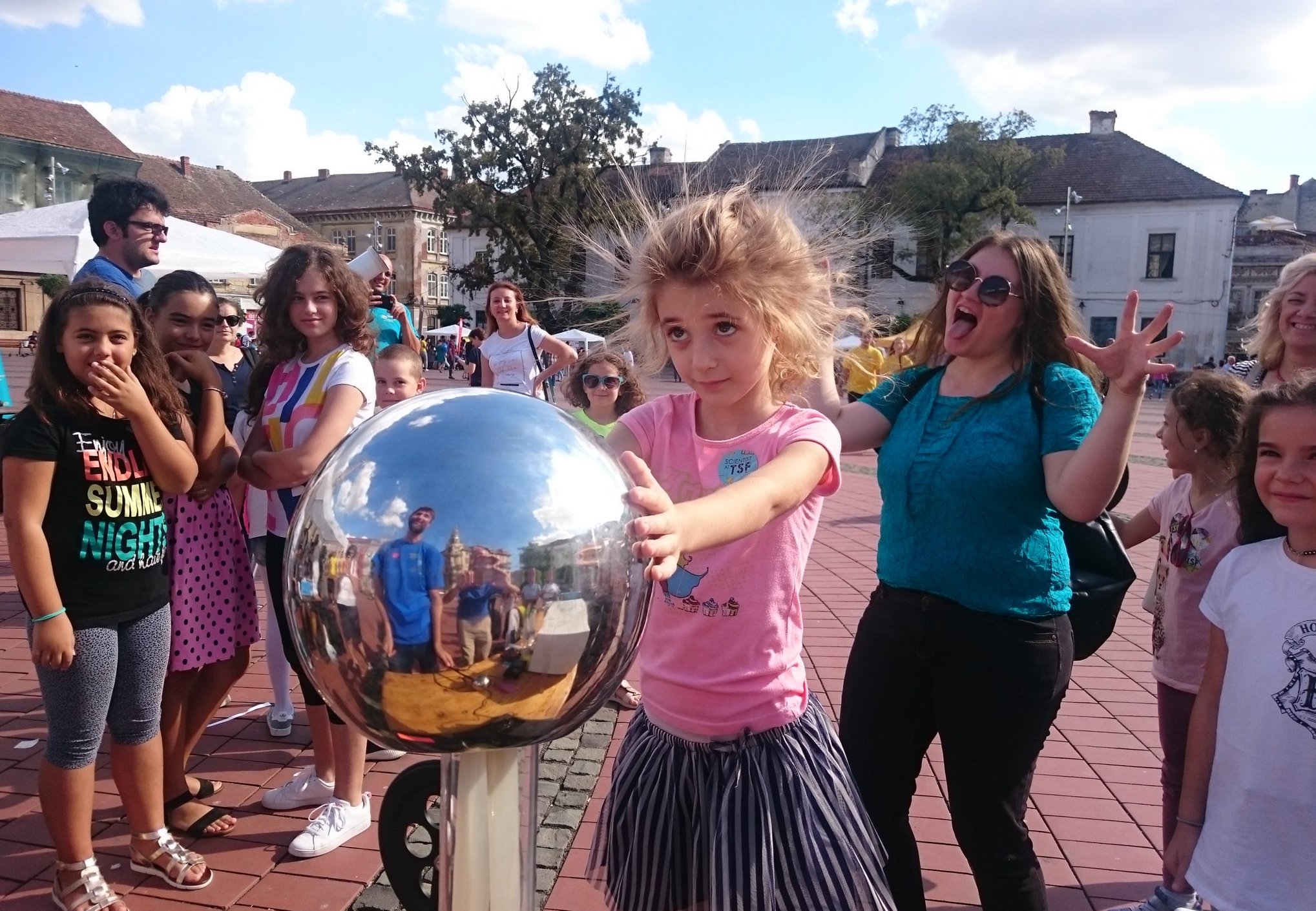 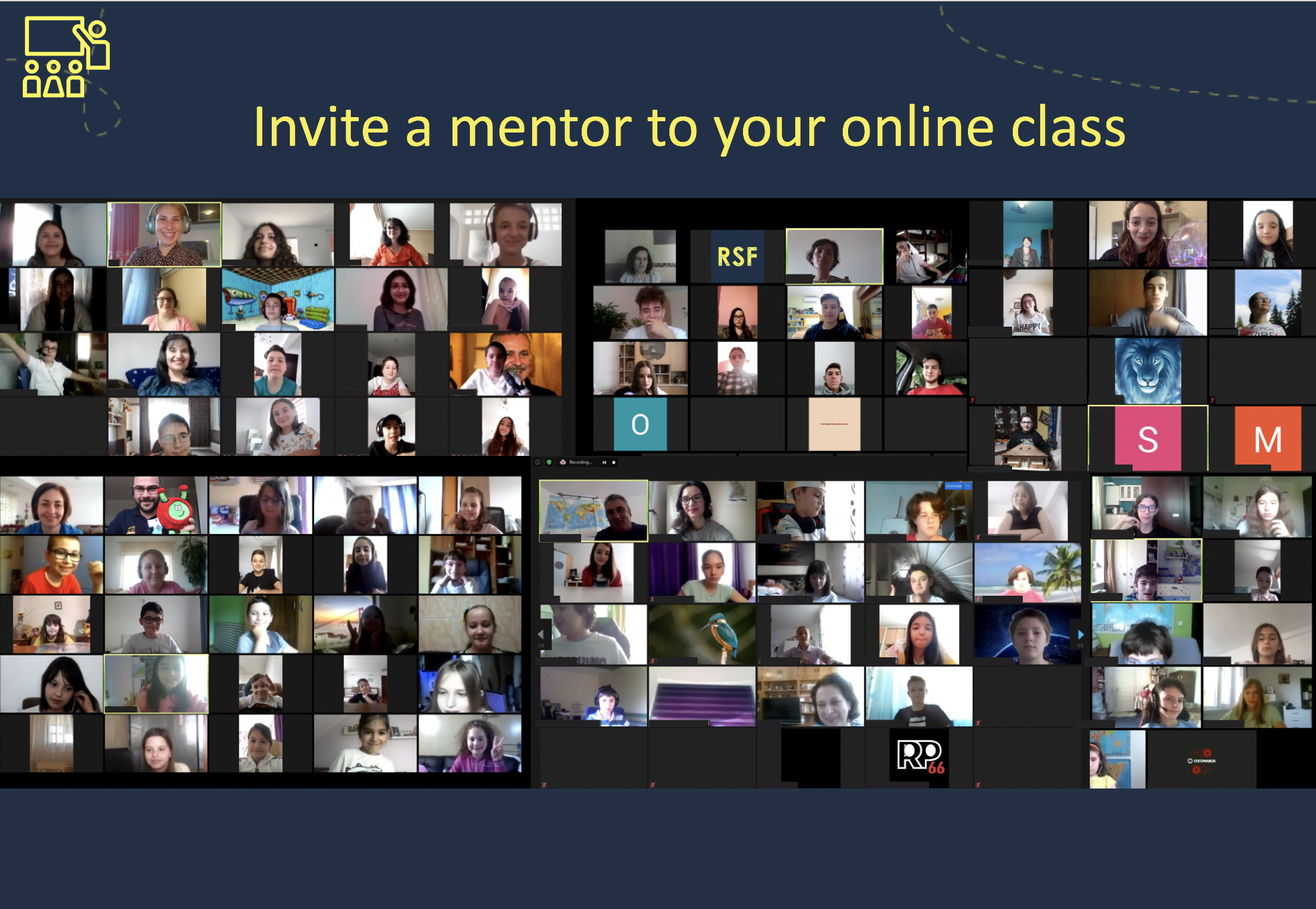 Invite a mentor to your online classroom

To support the education during the pandemic, I created a platform where scientists can connect with teachers and participate in online classrooms. Since April 2020, 50 researchers participated in 150 online classes, reaching 5000+ young people in Romania.